Press the space bar to navigate sequentially, or the left/right/up/down buttons to jump to specific sections.

Press alt and click to zoom in/out of an element.

Concordion.NET is a test runner
for executable specifications
that creates beautiful living documentation 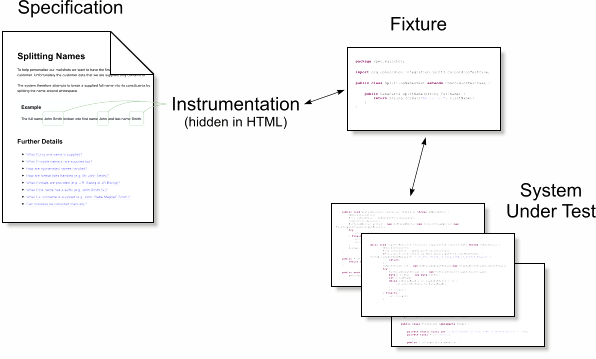 Are written in HTML

(by anyone on the team, typically by a BA or tester)

In order to make the specification executable, it must be instrumented with commands.

Commands are added as HTML attributes

the instrumentation is hidden

Runs as a NUnit test

(typically written by a tester or developer)

or other interfaces via "driver" classes

What are we testing?

Execute on a table

"I found it a little hard to start at first"

"it does what it says"

"write your specs, write your code, feel free to continue by adding more specs and by improving the code"

more on this later..

Markdown is a simple, natural format for creating rich text:

Markdown can be created/edited with all sorts of tools:

Reducing the friction of using Concordion.NET

Fork me on GitHub